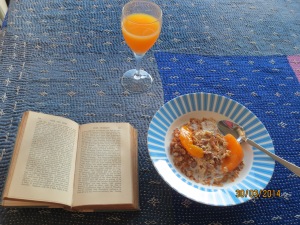 Nico had got halfway round the room by the time Myron came back. As soon as I let myself in that Saturday I could tell he was there, even though there was nothing obviously different. The house just felt inhabited.

“Oh, well,” I thought, “I suppose I can survive another four weeks. I could always go back home.” A wave of disgust washed through me so suddenly I felt my cheeks go scarlet. “I could always go back home,” I heard my voice bleating. As I stood there in the hallway outside the closed doors of the gallery someone began to ring furiously at the doorbell. I went towards it, looking back up the stairs in case it should bring Myron down. There stood Carly, tottering under the weight of a cage of squeaking white rats.

“Take it,” she said breathlessly, looking back over her shoulder. “Go on, take it.”

My hand hovered, withdrew. A door opened upstairs. I took the cage.

“Just till tomorrow,” she said, and ran away down the street.

I stood there with the cage heaving in my arms. Myron’s voice came closer, speaking to someone on the phone as he headed for the stairs. I looked round the hall. The rats’ squeak bounced off the walls. I dived for the cupboard under the stairs, shoved the cage in, pulled over it some sort of cloth that was lying there, slammed the door just as Myron’s legs came into view stepping deliberately from tread to tread.

A strange thing happens to me now. I’m in two times. The time inside me is frozen, the time outside me is running fast. As the check-trousered legs descend and I see, first the pudgy hand, the sleeve, then the edge of the tan bomber-jacket, an image from one of Nico’s paintings flashes up.   A little girl holds a huge ice cream, twice the size of her head, from which long trails of white descend as it melts. At the centre of the ice cream its cold heart glows. Even as I watch Myron come nearer and nearer, nearer and nearer the moment when he’ll open the gallery door and go in, even as I hear the surging and squeaking in the cupboard behind me, I’m frozen. I’m frozen and glowing. And I hear those squirrels, gunning their engines.

Come back next week for ‘An extraordinary imbroglio’.