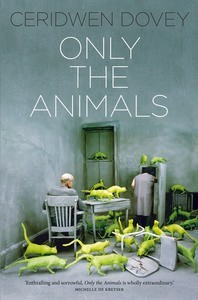 Gert is the wimpiest of the wimpy when it come to the suffering of animals, so it was a long time before she could bring herself to read Only The Animals, whose blurb says:

The souls of ten animals caught up in human conflicts over the past century tell their astonishing stories of life and death.

It  is as heart-rending as Gert feared, but it is a wonderful book.

What a unique soul Ceridwen Dovey is. Brains, heart and fearless imaginative capacity. She utterly inhabits the speaking voice of her narrator, whether it be a camel, an elephant or even, in the exhilarating spoof of Kerouac and Neil Cassady, a mussel on the move – I knew I had to get moving and follow my strange friend Muss with all  his loveproblems wherever he was going across the whole damn country…. boy did it feel good.  Alackadaddy, we were on the move again!

The stories span a century and many countries, from Australia in 1892 to Lebanon in 2006. There is a camel on an ill-fated journey of exploration in the Australian desert in the company of the drunken Henry Lawson; Colette’s cat, accidentally left at the front during World War 1; a chimpanzee who lies on the floor with Kafka observing the stars; Himmler’s dog; the Kerouacian mussel; Plautus the tortoise who lives first with Tolstoy’s daughter, then with Virginia Woolf, then with Orwell; an elephant caught up in drought and civil war in Mozambique;  a black bear in the zoo in the Bosnian war; a dolphin working for the US army in Iraq who writes to Sylvia Plath; and a parrot left behind by her owner in the Israeli attacks on Lebanon. Some stories work better than others; all are memorable.

The animals have a profound sense of the sacred, in nature and in the kinship between living beings.  They are ashamed when they kill, they love their human owners and trainers and see them more clearly than the humans themselves do, they  look up to the stars for signs of their history and future.  The bitter paradox is that the more they identify with their human owners and trainers, the more their nature is divided, as in the heartrending parable of Himmler’s dog, descendant of great proud wolves, who  becomes vegetarian,  practises lying in corpse-pose  like his master, and  hopes for nothing more than to become human in his next incarnation.

The title comes from one of the best stories, Soul of Bear:

What does it mean to be human? Perhaps only the animals can know (Boria Sax)

But this not a simple ‘animals good-humans bad’ message. Dovey says it is a homage to the many authors who have written about animals, and many of her animals intentionally use words, phrases and sentences taken from the work of other authors. ( A list of these sources is available at her website, ceridwendovey.com). It’s a celebration of the human power to empathise and to make stories from our common life on earth, in folk tale, fairy tale and the inventions of individual imaginations.

The book is clearly influenced by Coetzee’s Elizabeth Costello, but we liked it better for its grace, its poetry, its humanity. Here is the end of the tale of Plautus the tortoise, whirling above the earth in a Soviet spaceship:

I watched as the second spider, the one that had stayed behind in our capsule, began to spin a floating web in microgravity….The spider’s threads grew thick. I thought of the  legend of Charles Lindbergh’s solo flight across the Atlantic in 1927, that in fact he’d had company in the cockpit in the form of a common fly. Afterwards he’d said it had given him solace knowing something else was alive in his cold little cabin, for all those solitary hours flying across the night ocean.

Around the moon we went, the spider and I.

3 thoughts on “What does it mean to be human? Ceridwen Dovey’s Only The Animals”