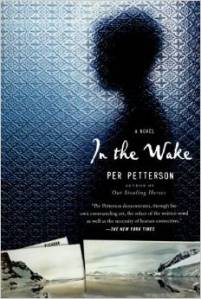 We’ve written in these posts before about our favourite genre “My horrible father.” Now we seem to be on a bit of a roll with horrible, or at least, difficult mothers. Last time it was P.O. Enquist and his God-fearing mama; this time it’s Per Petterson and his unattainable mother.

And then, unable to resist reading In the Wake, we found the focus shifted from mother to father. By no means a ‘horrible father’ but one to contend with.

I Curse the River of Time is the story of Arvid Jansen and his mother. It concerns his failing marriage, his political life, his unhappiness, but at its heart is a story about a man who yearns to be the most important person in his mother’s life and who never is.

The title comes from a poem by chairman Mao,

Fragile images of departure, the village back then.

I curse the river of time; thirty-two years have passed.

For Arvid, with a photo of Mao above his bed, who has for many years tried to live as a committed Maoist, this poem shows the human Mao,

who had felt how time was battling his body, as I had felt it so often myself; how time without warning could catch up with me and run beneath my skin like tiny electric shocks.

The whole book is a dizzying journey back and forth through time in Arvid’s life, beginning with the simple words,

All this happened quite a few years ago.

Arvid is telling the story of his mother’s last illness, but his weaving through time concerns his childhood and youth and the state of his life in those ‘few years ago.’ We learn that his relationship is about to end in divorce. He has two young daughters; it is not clear whether their mother is the very young girl who used to do her homework in his flat when he was a young factory worker. Later he mentions, ‘my first divorce’ so we can guess that life has remained difficult for him.

He is one of four boys in the family, the only one, his parents tell him, who was planned. But he does not feel this. He resembles his father; all the other boys look like their mother and he hates the fact that when he looks in the mirror he sees his father’s face. The father is very much a background figure in the family life. He has retired from factory work while his mother, having left the factory after kicking the foreman in the shins and walking out, still works as a hotel maid. She is the power and drive in the family. When Arvid meets her to tell her he has given up University to be a model worker she slaps him hard across the face. She has always been a worker and sees her son as a fool for giving up the opportunity to move on. They don’t meet for some time after this. But Arvid always thinks of his mother. In one poignant moment she speaks of his dead brother,

‘Do you ever think of your brother?’ my mother said.

‘Every single day I think about him,’ my mother said.

It was six years since he died, and I could not say the same…

But Arvid does think of his mother every day and tells her so.

‘That’s not necessary,’ she said with her back to me.

In his need for his mother Arvid has followed her from Norway to Denmark, her homeland, where she has gone to do last things that are important to her. But Arvid cannot let go and, even though he is in a deeply troubled state, he still tags along behind his mother and her friend as she makes a last journey. We find the reason for that journey at the end of the book and it is not about Arvid.

I was moved by the simplicity and clarity of Petterson’s writing and the character of Arvid, sincere, selfish, kind, even ludicrous at times. His mother cannot be clearer about her need to be independent as she has always been.

‘Is there anything I can do for you? ’I said, but she raised her hand and said:

‘If anything needs doing I’ll do it myself. Get out of my way,’ she said and pushed me in the chest.

As we leave him he is still pleading for his mother to put him first, to forgo the last things she needs to do.

‘And what about me?’

‘What about you?’ my mother said.

I took a deep breath. I looked at her.

‘But you can’t leave me here alone.’ I said.

This book mimics the working of memory in its weaving of images and phrases, scenes and places which stand out for a moment then disappear. It creates a world and characters that are human and convincing. This is the first book I’ve read by Per Petterson.

I couldn’t wait to read more and chose In the Wake, published in 2002. Per Petterson lost his parents and brother and a niece in the Scandinavian Ferry disaster of 1990, and this book is about Arvid Jansen again, mired in grief following such a loss. Angry, drunken, paranoid, now divorced and distant from his two daughters, but still somehow feeling like the same Arvid, lonely and ready to fend off any approaches. The difference here is that the focus is on the father, and the mother is very much in the shadows. This is a father who prides himself on his physical strength, a ski champion and a boxer, one who pushes his sons to emulate his exploits. He is not a bully like Knausgaard’s father but still one who is very hard to live up to.

The body should be a temple of life, he said, not a whited sepulchre. He was a skier and a boxer and when he breathed the air went straight into his lungs and did no harm at all, for the air was much cleaner then.

Unlike his father at the same age, forty-three, Arvid is a heavy smoker. He struggles to get enough air into his lungs. And he has been grieving for the last six years.

I think reading these books one after another deepens our knowledge and sympathy for Arvid. He is exasperating in his helplessness but somehow we see him slowly opening himself to the humanity of others. A woman in a store and neighbour with a young child, somehow bring him  closer to the everyday again. We see Arvid driving around the countryside in his ancient Mazda, and slowly slowly he begins to thaw and be able to breathe again.

The clear prose of this book, the descriptions of light on water, of the the utilitarian buildings and the seedy  flat where Arvid lives bring his world alive. I was deeply engaged by this book in so many ways.

Per Petterson: I Curse the River of Time (Graywolf Hardcover, tr Charlotte Barslund, 2010).

5 thoughts on “Mother again: Per Petterson’s ‘ I Curse The River of Time’ and ‘In The Wake’.”