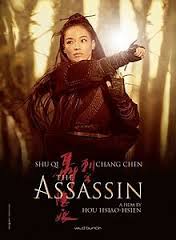 The Assassin (Hsiao-hsien Hou): Hsiao-hsien was awarded the Best Director prize for this film at Cannes this year and it is a stunningly beautiful, if often perplexing film. It opens slowly with a series of very long shots in black and white, then moves to a blazing scarlet sunset. We move from dark interiors and gorgeously decorated mansions, to wide panned exterior shots, often of lines of horsemen riding down hillsides. I very quickly relinquished the desire to follow the plot and gave myself up to the beauty of the images and the accompanying music.

The director does something I have not seen before, in filming many of the interior scenes through filmy curtains. The wind is always blowing, eerily shifting the curtains, which are in soft pinks and beiges, and much of the quieter action takes place in candle-light both obscured and heightened by the movements of the curtains.

The plot concerns The Assassin, Nie Ying Nian (Shu Qi), who was either abducted, or sent away by her family, to her master, an aristocratic nun, who trains her in the arts of the knife, so she can eliminate the oppressive local governors. She becomes an invincible martial artist, and strides through the film in her long coat. The fighting happens in violent bursts. She dispatches her enemies or those who attack her very fast. A clash of swords, a swift stroke from her knife, and she disappears leaving the ground littered with corpses.

At the end of the film she seems to have achieved her aim of taking someone somewhere (my grasp of the plot is shaky as you can see), but in her last meeting with the nun who is her master she is found wanting because she has let compassion weaken her training to kill without scruple.

A wonderful and glorious feast for the senses but I did come out with several questions. None of the reviews I have read make any attempt to answer them. I especially would love to know who was the other female assassin in the golden mask. If anyone has a clue, please let me know.

The Silences (Margot Nash): This film is described as a biographical documentary about the film-maker’s life. I don’t know Margot Nash’s previous work but it seems the same themes about childhood and growing up in a complicated family preoccupy her. She certainly has great material for such a film: letters, videos, voice recordings and many many photographs. Nash never really got on with her mother, she was the ‘bad’ girl and her older sister the ‘good’ girl, and her father suffered from a severe mental illness, which meant he was often hospitalized. Secrets were kept in the family, but gradually they come to light.

It’s always fascinating to see others trying to make sense of their own family and the effects it has had on them. So often it is a retrospective attempt to fit pieces together in line with preconceptions and this could be the case here.

I found the material fascinating but the structure of the film, for me, lacked a heightened filmic quality. The framing shots at beginning and end of boating to an island, the narrating voice of the author, the quotes on black screen from various feminist authors between sections seemed a bit predictable.

Would be nice to watch on telly on a wet Tuesday night.

Krisha( written and directed by Trey Edward Shults):  a searing family drama. The plot sounds a bit blah: late middle-aged Krisha, a fading beauty, is coming home for Thanksgiving. She wants to be reconciled with her family and she has sworn to her sister Robyn that she has done the work to turn her life around. She is off the booze, and taking her prescribed medication. But she has not reckoned on the power of the family environment to knock her off balance almost straight away. Loud testosterone-filled young nephews arm-wrestling and yelling, football booming from the huge  TV, nine dogs galloping and barking through the suburban house, and the insidious needling of her brother-in-law, Robyn’s husband. We hear things through Krisha’s ears, see them through her eyes, and it is excruciating. Never has the preparation of a Thanksgiving turkey been so terrifying.  The camera lingers on Krisha’s  ruined face, as  she hides in the shadows spying on the family, or rummaging in drawers looking for her stash.  It is only a matter of time before everything falls apart. A fantastic film with stunning camera work and tight acting.

A black mark to IMDb for their listing of this film. The youngest and most attractive actress Olivia Applegate gets top billing; the standout lead, on screen throughout the whole film, is of course Krisha Fairlight, but she gets 5th billing and no photo.

The photo above is taken from this article about the film: