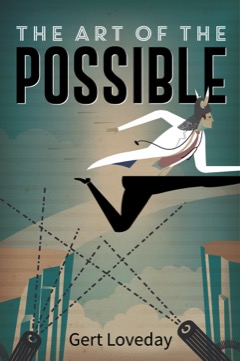 An extract from The Art Of The Possible, in which Dr Frank Owlbrother tries to decode the new language of his workplace:

The last thirty years at Florence Packer were starting, in retrospect, to look like the good old days. There had been nothing more taxing in his role as Assistant Medical Director (AMD) than timecards, rosters, meetings of the Health and Safety Committee, and the odd clinic now and then. He’d given up any ideas of medical heroics. He had plenty of time for his collection. He’d looked forward to ending his working life as AMD, pleasantly calculating the value of his indexed pension. That was till six months ago when Doberman and his cohorts rode onto the scene, the raiding-party from the big city hospital half an hour down the road. They were to be amalgamated. Networked. In a month the Medical Director had been “let go”. The hospital was being “reframed in the light of demographic changes”, they were told; the need was not any longer for a general hospital, but for a Centre of Excellence dedicated to the Care of Seniors. A flagship, Doberman said. Frank kept his job. He was still a medical administrator, as far as he could see, but he was now styled “Department Head of Community Interface”. He still hadn’t worked out just what he was meant to be doing. It seemed to consist of meetings conducted in an incomprehensible jargon and demands for documents described by acronyms. KPI, BP, VS, PD – fortunately Fran Peebles was able to tell Frank what they meant.

Going through the comics reminded Frank that he was still waiting for HiHo Larry to send through the last in the Rage of Thorleik series that he’d bought on Netsell a few weeks ago. Larry was usually pretty reliable. He switched on the computer to see if there was an email. Nothing from Larry, but there at the top of the list, marked with an exclamation mark and a little red thing like a flying bat, was an email from Doberman. Even as Frank’s mind was saying, ‘Leave it till tomorrow,’ his fingers, drawn by the horrible fascination Doberman’s correspondence induced, were opening it.

Good to touch base last week. A reminder about your KPIs as discussed. I need them on my desk month’s end at latest for inclusion in the organisation-wide Excellence Register. As part of the process to kick-start the execs thinking, I’ve put together a PD for each position as it would appear if the job was being advertised (just joking, guys! You’re all doing a great job!) All this in the prism of our overall vision – trust you have all received your VSs and affixed them to the wall according to Poster/Schedule Protocol 2.11.

Your PD is attached.

Possessing excellent stakeholder management skills, you are a proven performer who enjoys driving strategic capability initiatives within a framework of dynamic management philosophies and paradigms. You are a whole-brain thinker, highly organised and comfortable working within a fluid environment. You are passionate about change management, engagement and talent development, influencing and building lastingly mutually beneficial team relationships. Your remit is to drive and implement key interventions that support overall business strategy, focussing on the connection between leadership, communication and the bottom line and the development of the people and culture platform to create sustained cost capability.

He groaned. From outside the door he heard Pat’s voice,

‘Frank? Frank? Would you like a Coloxyl and Senna?’