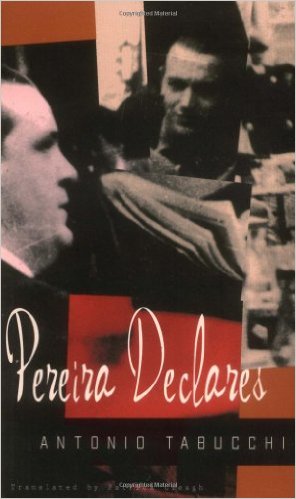 What a wonderfully cunning and slippery piece of work this is, pretending to lull us into torpor along with its sweating, overweight protagonist in the sweltering Portuguese summer, but constantly nudging and needling our conscience, just as the rather inept young revolutionary Massimo Rossi nudges and needles Pereira. Pereira is the cultural editor of a minor journal in Portugal in 1938 under the Salazar dictatorship. He doesn’t like his country’s politics or its support of Franco – but what can he do?

I’m only the obscure editor of the culture page of a second-rate evening paper, I write up the anniversaries of famous authors and translate nineteenth-century French stories, and more than that I cannot do.

I understand, replied Senhora Delgado, but surely there’s nothing one can’t do if one cares enough.

Pereira looked out of the window and sighed. They were nearing Vila Franca, already within sight of the long snaking course of the Tagus. How beautiful it was, this little land of Portugal, blest by the sea and its gentle seaborne climate, but it was all so difficult, thought Pereira. (46)

Pereira seems to be completely without ego when we first meet him. He’s given up on involvement in the world. His only confidants are his local priest and the photo of his dead wife, and he thinks of himself as a mountain of blubber (even if he does accept that there’s a soul buried under the blubber). He thinks a lot about death. He likes the backwater of an office where he works alone, away from the main offices of the paper. Never mind if the caretaker is a police informer. What is there to inform on in a man whose job is writing obituaries of authors and translating Balzac or Daudet?

“Pereira declares”, the book says over and over again, and the things he declares amount to the manifesto of a man who has chosen to think about cheese omelettes and Balzac rather than his own idealistic past or the repressive times he lives in now, but who is increasingly unable to keep the present reality at bay. Pereira declares that his housekeeper makes cheese-omelette sandwiches for him, that he had a dream whose contents he won’t disclose because dreams ought not to be told, that he suspects his caretaker of being a police spy, that he cannot presume to say why he warns Massimo Rossi about this fact, that he left his hat in a restaurant, that he woke early one morning thinking of a Balzac story about repentance and felt he had something to repent, that on one occasion he felt this deep yearning for exactly what he cannot presume to say, but it was a profound yearning for a life that was past and for one in the future. He speaks in the same unaccented tones about lemonade and cool baths and his cardiologist’s advice, and about squads of police patrolling the city.

Tabucchi floats above these declarations of Pereira as if he were simply relaying them to us. But every now and then he speaks straight to us, cutting through to the real Pereira with a dignified, heart-breaking clarity:

And then he thought about the child they hadn’t had. He had longed for one, but he couldn’t ask so much of that frail suffering woman who spent sleepless nights and long stretches in the sanatorium. And this grieved him. For if he’d had a son, a grown-up son to sit at table with and talk to, he would not have needed to talk to that picture taken on a trip so long ago he could scarcely remember it, And he said: Well, never mind, which was how he always took leave of his wife’s photograph. (8)

Heroism doesn’t have to be dramatic, Tabucchi shows us in this endearing figure. The change in Pereira happens simply because he’s a kind, lonely, romantic soul and another person asks him for help. He knows what the regime is, but without this human connection he would never have taken action against it. Pereira helps Massimo Rossi and his girlfriend not out of political activism, but out of kindness, a nostalgic pleasure in the romance between these two young people, and because Massimo Rossi reminds him of the son he never had. Really basic, ordinary human qualities. And once that essential humanity in him is reignited, he can’t help but care about, and act in, the wider world.

I just loved this book. Without simply quoting great chunks, it’s hard to convey Tabucchi’s skill and subtlety as feeling and thought slip and shift through the various levels of control Pereira has in place. For all the ugliness of the political situation and the many who collaborate with it, it’s sweet-natured, wise and funny. And at the end you stand up and cheer for Pereira.