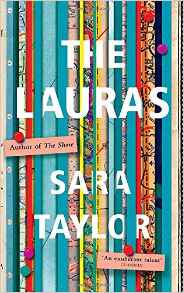 An American road-trip novel? Not the sort of thing that usually sends me rushing to the library but I’d heard such good things about Sara Taylor that that’s just what I did. And I wasn’t disappointed. No Kerouac, no Thelma and Louise, no Humbert Humbert. Just 13-year-old Alex and Ma, walking out on Dad and heading somewhere Ma seems to have been planning for a long time. As they cross America from north to south and east to west, Ma stops off to settle some old scores and meet some old obligations. And Alex, the voice of the book, grows up over the next two years, not sure where they’re going or why, private and watchful, holding absolutely still while at the same time moving relentlessly, unstoppably forward (270). They’re close but not close; Ma is always watching out for Alex, but what’s going on inside her is a mystery to the kid, even though as they go she begins to talk for the first time about her childhood and youth. There’s another aspect to Alex that I won’t reveal here because it took a while to dawn on me and I enjoyed the way it did.

The Lauras of the title are girls Ma has known and loved at different times in her life, starting from her first childhood friend, and these are some of the stories she tells Alex. I did find the Laura thing a bit of an unnecessary frill, but that’s a minor quibble. The restlessness of an immigrant nation, the feeling that home was a place I was going to, rather than a place I could occupy is what really powers the book and never leaves Alex even in later life. Nature or nurture, something I had been born with or something that had grown with every step and mile, it didn’t matter which. I had my mother’s restlessness. (296)

The rhythm of the road trip is in Taylor’s rangy, flexible style:

As rain began to rattle against the roof my eyes closed. I heard the engine on the other side of my dreams, felt the car move, but it was easier not to be awake. It wasn’t until we stopped and I heard Ma put the parking brake on and cut the engine that I opened them again.

She was leaning her elbows and wrists on the steering wheel, holding a lit cigarette between her fingers but not smoking, the mumble of the radio cut off like she’d closed a door on the lonely singer. The sky was white over a whiter beach and even whiter breakers, all tinged a faint blue from the tint of the windshield glass. Out of the dark, foaming ocean a sun was rising massive and red. (31)

The long straight empty roads, the burger joints and truck stops and brown-carpet motels, the sun coming up over fields and freeways, the windshield dark with the coming evening or bright with early frost, the smell and sound of the sea, life in tired little towns off the main highway – all this is convincing, memorable and interesting, as is Alex, the narrator. Sara Taylor’s preferred mode seems to be the story – her first book The Shore is a series of interlinked short stories about a collection of small islands off the coast of Virginia – and The Lauras is essentially a series of stories about Ma’s life, connected in the overarching narrative of the road trip and the world that’s emerging for Alex.  None of the episodes has the mind-blowing punch of Target Practice, the first story in The Shore, or the dreamy beauty of the last one, Tears of the Gods, but the whole is more than the sum of the parts. What holds it all together and makes it so interesting is not Ma’s mission and the way she carries it out, but the voice of Alex. I’m not sure how old Sara Taylor is, but she’s pretty young. She’s got a lot more to give us yet.

17 thoughts on “Sara Taylor: The Lauras”