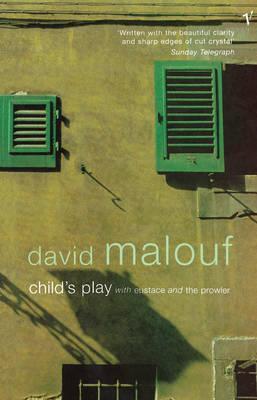 Child’s Play is a thought-provoking read in these times when every week seems to bring a new terrorist attack. We’ve got used to a fairly clichéd image of the terrorist as someone “radicalised”; Malouf gives us a much more subtle picture of the terrorist we could perhaps all be, the terrorist who can still stop on the way home to watch children playing:

one of them always the outsider, the others always in flight from him, but their cries, their trails of white breath, mingling, and the outsider always managing at last to touch one of his comrades and so break back into the group. (116)

Malouf is a beautiful writer – meticulous, elegant, with a poet’s eye and ear. A poet, novelist, playwright and librettist, he will not be as well known to our overseas readers as he is to Australians, though he’s won the IMPAC Dublin Literary Award and had two Booker nominations. He’s well worth your discovering, particularly his superb novel Ransom, which retells the story from The Iliad of the death of Hector and his father Priam’s visit to Achilles’ tent to plead for the return of his son’s body.

Child’s Play is an early novella (1982) whose narrator is a young anarchist preparing for an assassination in a small town in Italy. His target, chosen by the organisation for maximum shock effect, is a famous author whose work the killer knows through and through; he reveres the work at the same time as furiously resenting it. The famous author has written a novella about an assassination that feels to our narrator like a foretelling of what he’s about to do:

Reading his infernal speculations about the origins of violence in our age, I felt myself first hot, then cold, as if a hand had been laid upon me in the silence and I might be recognised by any passer-by in the street. I felt anger as well. As if all the things I have so painfully discovered and fought for all my life were, after all, quite common and ordinary – predicted, described, made public a decade before my birth. (55)

Clearly, though the narrator claims to be acting on behalf of the very life in the street – ordinary, loud, richly confusing –  he wants to see himself as out of the ordinary, a lone figure taking on some superhuman task, adventuring … into the pure space of himself. (26)

The narrator is swayed this way and that between the need to be extraordinary and the need to belong, the need to live to the rhythms of human time and the need to defy time by making a mark in history. Though he minutely observes and describes the details of his daily life, there’s a strange sense of detachment, as if the world were passing before his eyes without his really being part of it. This is heightened by the conditions of his training, in which all his companions have pseudonyms and nobody knows anything about who the others really are, why they’re there, or what their missions are. Spending his days poring over the plans for his mission he goes further and further into himself and further and further into the mind of his target, until the confrontation between them takes on a fated, heroic significance:

Does it turn out that way? You’ll have to read it for yourself. If you do, you’ll never forget it.