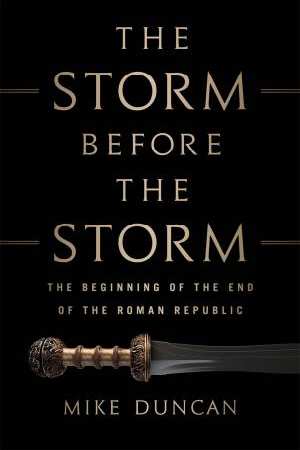 While producing ‘The History Of Rome’ I was asked the same set of questions over and over again: Is America Rome? Is the United States following a similar historical trajectory? Mike Duncan says in the introduction to The Storm Before The Storm.

One of the Gerts is a great fan of Mike Duncan’s podcast The History Of Rome, and has often asked herself that question. But it isn’t only the US you think of. The Roman republic as it unravelled was
an era full of historical echoes that will sound eerily familiar to the modern reader …rising economic inequality, dislocation of traditional ways of life increasing political polarization, the breakdown of unspoken rules of political conduct….
eerily familiar indeed, and not just in America. We can boast our own version of it here in Aus.

There are so many Aha! moments:

if…there is a limited number of elements from which events are interwoven, the same things must happen many times, being brought to pass by the same agencies (Plutarch)

Thieves of private property pass their lives in chains; thieves of public property in riches and luxury (Cato The Elder)

We are silent when we see that all the money of all the nations has come into the hands of a few men; which we seem to tolerate and to permit with the more equanimity, because none of these robbers conceals what he is doing. (Cicero)

But this was an age when a lie was not a lie if a man had the audacity to keep asserting the lie was true. (Mike Duncan)

At the beginning of another year of political upheaval, is it cheering, or not, to know that all this has happened before?

10 thoughts on “The Storm Before The Storm”