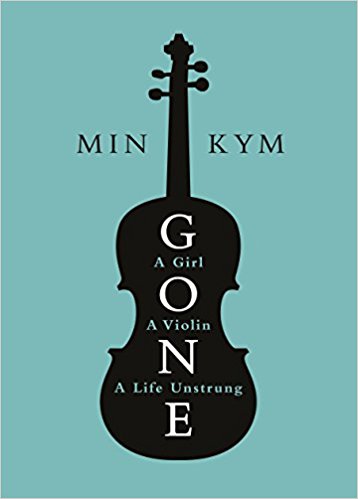 What is a child prodigy? Here’s another stab at it. It’s a means to another’s end. Oh, they wish you well, wish the very best for you, but there is a price to pay and the price is you. (172)

In 2010 Min Kym’s 1696 Stadivarius violin was stolen from a cafeteria at Euston Station. From the moment she first played it, ten years earlier, it had been like an extension of her body and soul, and its loss, she still says, ruined her life. She was inconsolable, in deep depression. Even though the violin was recovered three years later, Kym never got it back because the insurance had been paid out and the insurance company now owned it. Her career had collapsed and she could not afford the higher price it now commanded. It’s hard to believe there wasn’t a way for her to get an investor to buy the violin and let her go on using it, and in fact one dealer later told her that, had he known, he could have organised it. But, as had happened all through her life, she had handed over control to the men in her life – her ex-boyfriend (who had a big part in her losing the violin in the first place), the dealers and the Tarisio auction company that stood to make a big gain on the sale of a violin that was even more valuable because of the sensation surrounding its loss and recovery.

Kym’s talent, we see, is a curse as well. Born to play, driven to play, never happier than when playing, at the age of 7 she was flung onto the high-speed one-way street that’s the life of a child prodigy.

Starting a career when you’re as young as I was does peculiar things to you, things that don’t really become apparent until you’re a little older. You’re exposed to the ways of the adult world, and, while you have the capacity to understand it, it doesn’t sit well on you. Your life has been accelerated and you’ve been driven past a whole chunk of it at breakneck speed. There it goes! Your childhood! Gone! Never to come back! One moment you were a child living with your parents, the next you’re out there on stage, violin in hand and concertos in your head and no in-between. 69

With a cultural background that makes her obedient and self-effacing, she has no defence mechanisms against a series of powerful and dominant male teachers and her emotionally-manipulative boyfriend. Perhaps this explains the intensity of her relationship with this particular violin, that with it she feels completely herself. She plays other magnificent instruments, and she recognises that some of them are better than her own. It doesn’t matter. It’s a whole-hearted love affair. As she says, seeing the violin in another person’s hands is like seeing the love of your life married to someone else. (She’s really catty about the new owner, too).

It’s a wonderful insight into the life of a supremely talented musician frank about her human frailty. Read it too for the way she writes about the music she loves and the players she reveres. I’m keen to see how she picks up her life from here.