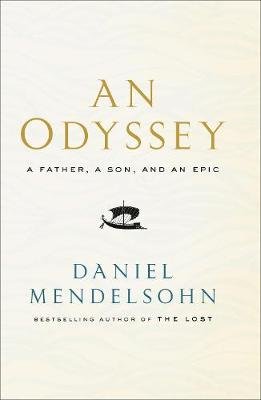 Another thing that my father didn’t like about Odysseus was the fact that the hero weeps.
He’s always crying! He exclaimed as we drove to campus on the third Friday in February. We were going to be discussing Books 5 and 6 that day. Crying? He shook his head in bemusement. What’s so heroic about that? (119)

Imagine, if you’ve ever been a teacher of teenagers, what it would be like to have your old dad sitting in the back of the class saying things like that. Here you are, trying to instil your own love of the work into your students, and Daddy is dissing the hero, or breaking into a Johnny Mercer song to compare it with Homer. No wonder Daniel had misgivings when his 81-year-old mathematician father decided he’d like to audit the undergraduate course on The Odyssey.

But like The Odyssey, this is a voyage of discovery for father and son. Daniel is humbled and changed by what he learns about his father over the course of the term and during a cruise they take to revisit the supposed sites of Odysseus’ voyage back from Troy to Ithaca. His father Jay, behind the sceptical façade, is really listening to students a quarter of his age and thinking about what they say. And both of them are thinking about the themes that emerge as the students discuss Odysseus’ journey: trust, fidelity, lasting relationships, personal pride and personal weakness, the masks we shelter behind, and running through it all, the love of life. Achilles the great hero, who preferred a glorious death to a mundane existence, has changed his mind when Odysseus meets him in the Underworld:

I’d rather serve another as a land-bound serf,
Some man without a portion, no livelihood
Than be the lord of all the withered dead.

If you haven’t read The Odyssey you’ll want to after reading this. The mix of a literary journey with autobiography is quite a popular genre these days, but this one is memorable for its warmth and commitment as much as its narrative skill.

And speaking of Ithaca, Mendelsohn has also translated Cavafy’s works including the wonderful poem with that title. Here’s a link to it if you don’t know it:

6 thoughts on “Daniel Mendelsohn: An Odyssey”