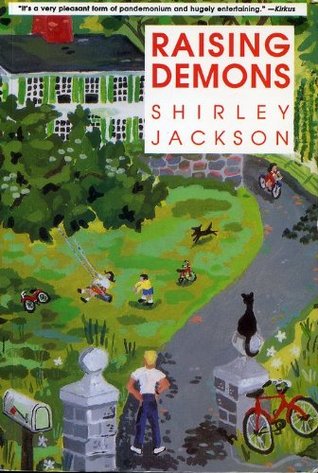 Nothing is stable in this world. As soon as Barry was old enough to be regarded as a recognisable human being, with ideas and opinions, it became necessary for the other children to change him around. Since he was now too big to fit into a doll carriage, Jannie amused herself by dressing him in costume jewelry and ribbons. Sally sat on the floor next to the playpen and sang to him because, she said, it made him dance. Barry was clearly too formal a name, and we took to calling him B. B was too short, however, and he became Mr B and then Mr Beetle and finally Mr Beekman. He stayed Mr Beekman until he was almost ready for nursery school, and then came around full circle, moving back to Mr B, then B, and, at last, to Barry again. At one point he developed a disconcerting habit of answering no matter who was called. Thus, dancing and decked in ribbons, Beekman walked instead of creeping, and learned to drink from a cup.

At the beginning of this memoir, Shirley Jackson and her family buy a big house because she can’t fit anything more into the cupboards in the house they rent. It’s not too long before the cupboards in the new house (which is falling apart) are overflowing with exactly the same junk. Jackson fights an optimistic but losing battle against the mysterious accumulation of stuff, the compelling personalities of her four children, assorted dogs and cats and a husband who retreats to his study and leaves her to get on with it all.

It’s often very funny, and she has a lovely turn of phrase, but unless you’re already in love with the Jackson family from her first memoir Life Among The Savages, and have an endless appetite for their foibles, you might find it just a bit too long. I did.