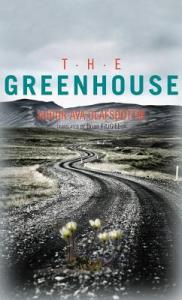 -You won’t get far on dreams, Lobbi, Dad would say.

-You’ve got to follow your dreams, Mom would have said. And then she would have gazed out the kitchen window, as if she were surveying a vast domain, and not just those few yards to the greenhouse and another few again to the fence. The entire garden was a single plot of swarming vegetation, and it was impossible to see beyond the fences through the rich tangle of plants, trees, and bushes…

These are the influences on young Lobbi’s life. His elderly electrician father, who loves tinkering and repairing, and his dreamy gardening mother. Her persistent efforts on the unrewarding Icelandic soil have produced a garden full of flowers and vegetables, and it is in her greenhouse where Lobbi studies for his exams and where a brief encounter with a school mate results in the birth of his daughter Flora Sol.

Anna, Flora Sol’s mother, asks little of Lobbi. He is present at the birth, but Anna is independent and has her own ambitions in studying  genetics. It seems she will need little help from him in raising their child..

Before Lobbi can set off on his long dreamed of journey to restore the rose garden in an ancient monastery, his mother is suddenly killed in an accident. Her last act is to phone Lobbi from the wreckage of her car and ask him to care for his father and his autistic twin brother Justin. He still leaves home, but his journey is punctuated by frequent phone calls home to his father.

We follow the twenty-two year old on his long journey  to the monastery in a country (I can’t quite work out where it is meant to be) which is far from Iceland, and where the local language is dying out. As he drives through forests and across borders, he reflects on what his life is meant to be, and recalls conversations with his mother.

The monastery garden lives up to his expectations (he has read books about it all his life)but the monks are something of a surprise. Father Thomas becomes his mentor, introducing Lobbi to worldly wisdom as found in his huge store of foreign films.

Having discussed death with Father Thomas and now watched thirty-three film gems with him, while the credits roll over Andrei Rublev, I feel ready to tell him about my obsession with the body and sex… It’s not  as if I’m confessing my sins…I feel much more like I’m trying get some things off my chest with my neighbour and friend from the next room.

Then Flora Sol comes to stay and he is able to find a depth of love and caring  he has never before experienced .

…I grab our daughter from the floor where she is sitting piling up letter cubes, tearing her away from a half-finished Tower of Babel, and stand her in the middle of the floor, like a strolling player premiering a divine comedy. First I hold her hands and then gradually release my grip, one finger at a time. Initially she stands there in the middle of the kitchen with an incredibly concentrated air, then the miracle occurs; she shifts all her body weight onto one leg so that she can lift the other one off the floor and quickly turns it into step forward. Then she repeats the process with the other leg and takes a total of four steps forward with growing confidence, by swinging her hips like a little robot.

This book is gentle and meditative,  written in the voice of the young man, and always appropriate for his age, with soul searching about the nature of the body, and about life and death. Some have found it too sweet and not sufficiently challenging, but for me it was authentic and convincing. If you like a bildungsroman with the simple language and reflective quality of the work of Per Petterson or Anne B Ragde, this  will appeal.

Audur Ava Olafdsadottir is a prize winning Icelandic novelist, playwright and poet. Her new novel, Hotel Silence, won the Icelandic Literary Prize in 2016 and is available from Pushkin Press.

The Greenhouse and another novel, Butterflies in November, have been translated into twenty-five languages.