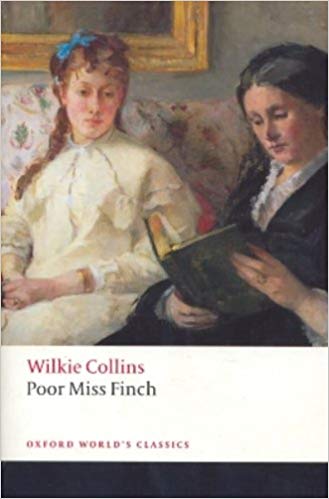 Put together a beautiful blind girl, identical twins madly in love with her, a silver nitrate treatment for epilepsy that turns the sufferer blue, and a sharp-tongued French narrator with fiery republican beliefs and little patience for the lumpen English, and what do you have? Wilkie Collins’ Poor Miss Finch. I had a great time with this. Yes, it is a “spider’s web of improbabilities” as the introduction says, but no more so than any of Dickens’ plots, and completely lacking in Dickens’ sentimentality or sanctimony.

Poor Miss Finch is the blind girl Lucilla, who has the possibility of regaining her sight by an operation for cataracts. Collins used a 1728 account of the first successful cataract operation on a 13-year-old boy for Lucilla’s story.  How does someone who has an exquisitely-tuned non-visual relation with the world adapt to sight? Does our dependence on sight lock us into conformity? Lucilla, unlike a conventional girl of the times, is unashamed of showing her passion for her suitor Oscar, and the narrator Madame Pratolungo thinks this is because

Lucilla has to be protected, Madame Pratolungo thinks, because her “fearless and primitive innocence” leads her to show her feelings for Oscar in a way that’s unacceptable and even dangerous. And yet the blind Lucilla’s intuitions are shown to be truer than the judgments of the sighted.

There’s a complicated tale of deception woven around the possibility of Lucilla’s regaining her sight. Oscar has a terrible secret that will be revealed if she can see; his twin brother,  the one encouraging the operation, is secretly in love with Lucilla himself. Can he be noble enough not to take advantage of the situation? (No, is the short answer to that.)

The book was not a success. Reviewers disliked Lucilla, either complaining of her “uncontrolled self-will” (a blind heroine was expected to be noble and spiritual) or that she was a wax doll. But T.S. Eliot and Hugh Walpole thought well of it, and so do I. It’s constantly interesting, and the sparky Madame Pratolungo is a treat as she observes the foibles of the English.  When you want to curl up for one of those good long old-fashioned reads, this is just the book. And if you prefer to listen, there’s a audio version on the free site Librivox:    https://librivox.org/poor-miss-finch-by-wilkie-collins/