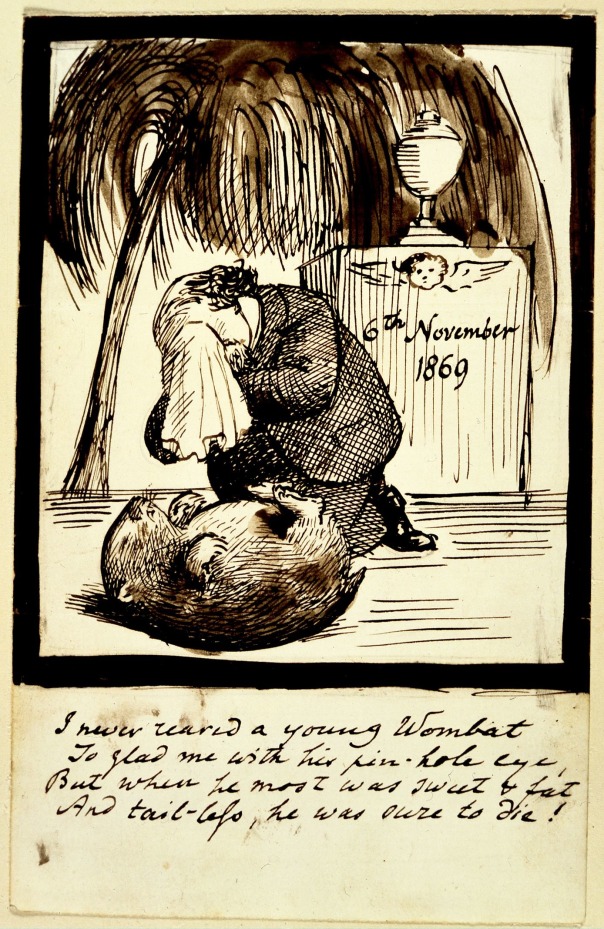 Wombats have offered solace where little other solace could be found. Theodor Adorno was a frequent visitor to Frankfurt Zoo after the Second World War. He wrote to the director in 1965: ‘Would it not be nice…if Frankfurt Zoo could acquire a pair of wombats?…From my childhood I remember great feelings of identification with these friendly rotund animals, and would be filled with delight to see them again.’

How Adorno had come to know about wombats is not clear, as they are native to Australia, but he was mistaken in his opinion about their disposition. They are known to be aggressive and fast moving if they feel threatened. Their cuddly appearance and close relation to the koala has not always worked in their interest, as can be seen in the case of another wombat lover, Dante Gabriel Rossetti:

Rossetti’s wombats did not thrive in captivity. His last wombat sketch is of himself, his handkerchief covering his face, weeping over the dead body of a wombat. Below he wrote a mournful quatrain, riffing on Thomas Moore:

I  never reared a young Wombat

To glad me with his pin-hole eye

But when he was most sweet and fat

And Tail-less: he was sure to die!