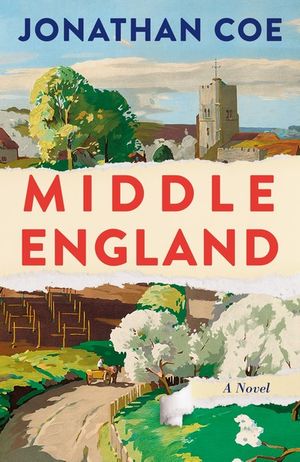 he became fascinated by the concept of ‘Deep England’, a phrase which he began to encounter more and more often in newspaper articles and academic journals. What was it, exactly? Was it…to do with the village green, the thatched roof of the local pub, the red telephone box and the subtle thwack of cricket ball against willow? Or to understand it fully, did you have to immerse yourself in the writings of Chesterton and Priestley, H.E. Bates and L.T.C. Rolt….the works of Elgar, Vaughan Williams or George Butterworth? The paintings of Constable?

Jonathan Coe is not asking “What is Middle England?” in this novel set in the lead up to and the aftermath of the Brexit referendum. He’s telling us. To be perfectly frank, Coe is rather a pedestrian writer. You won’t find style or subtle characterisation here, and the whole thing has a schematic feel, as if he’d made a list of all the relevant issues to be covered and then introduced a character or a situation to illustrate them. So, rather like a TV drama, it details old-fashioned British zenophobia, good-hearted foreigners slighted or suspected, riots, gender dysphoria, homophobia, older people nostalgic for the England of their youth, golf courses populated by Tories, shuttered factories, humourless political correctness, Twitter attacks, farmers harassed by EU regulations, dissembling politicians and spin doctors, untrustworthy journalists, the deaths of Amy Winehouse and Victoria Wood, the opening ceremony of the 2012 London Olympics, in short, as the blurb says, the story of modern England: a story of nostalgia and delusion; of bewilderment and barely suppressed rage.

I was underwhelmed by this, but don’t let that put you off.  It’s clear from the Goodreads ratings that it spoke differently to lots of other people. Give it a go if you’re interested in modern Britain in the throes of Brexit.