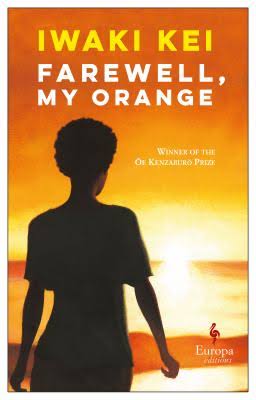 Farewell, My Orange by Iwaki Kei is a sweet tale of a Nigerian refugee and a Japanese woman transplanted to a small Australian country town who become friends.  A first novel, it won the Dazai Osamu Prize for an outstanding short story by an unrecognized author, and the Oe Kenzaburi Prize for a Japanese literary novel. Strangely enough, the more compelling character is the Nigerian woman, Salimah; the Japanese woman, Sayuri, presented mainly through a series of letters she writes to her former English teacher, never quite takes on the same flesh and blood as the gritty Salimah, who starts off an illiterate outsider and ends up a valued local identity with a deep sense of fulfilment and happiness. Moving and enjoyable, and I’d really like to think this is the experience of lots of others brought here by fate.

Convenience Store Woman by Sayaka Murata is a much darker piece of work. Yes, it’s funny, but it sneaks up behind you and smacks you hard across the head. Keiko has a good degree but she chooses to work in a convenience store, because there she can learn the rules and be a cog in the wheel of normal life. On her own she has no idea how to be “normal”. As a child her spontaneous behaviour confounded adults. She never understood why, but she learned to watch other people’s expressions, the way they speak and the emotions they show and to mimic them. She’s flown under the radar, but at the age of 36 she’s constantly being quizzed as to why she has such a lowly job and why she isn’t married. Once again, people are realising she isn’t “normal”. The solution she finds is bizarre. A cunning and disconcerting take on Japanese society that makes us look harder at ourselves, wherever we live.