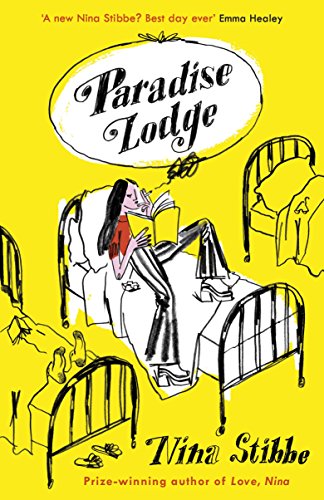 The Gerts have often thought of writing a book set in an old people’s home, but we really couldn’t do any better than Nina Stibbe’s Paradise Lodge. With an insouciant 15-year old school-avoider grandly styled an “auxiliary nurse” as our eyes and ears, we become part of a strange family in the dilapidated house that was once a grand mansion:

The floor tiles are knockout, aren’t they? You won’t see better in the Alhambra – Euclidean geometry and whatnot, says the owner on Lizzie’s first visit. His wife Ingrid isn’t a fan of the tiles: she went on to list the many ways in which the building was unsuitable for its elderly residents.

It’s no wonder Ingrid, who manages everything, goes off to start a better facility with all mod cons, leaving the place to an assortment of “nurses” with qualifications as dubious as Lizzie’s and a “matron” who is one of the most inspired liars in literature. Money is in short supply, and the tradesmen are turning nasty. Thank God there’s an assortment of tins of pie-fruit and custard powder in the pantry, and thank God for young Mike Yu who donates food from his Chinese restaurant, and Mr Simmons, one of the patients who ends up virtually running the place while the owner drinks his way through the left-over Tia Maria and crème-de-menthe. The residents don’t bat an eyelid at any of this, and Lizzie enjoys it all so much that she hardly ever goes to school. If she does she’s likely to run into her sworn enemy Miss Pitt, who is constantly trying to kidnap her stepfather Mr Simmons because she doesn’t want him spending money on a place at Paradise Lodge. This is what happens when Lizzie and Mr Simmons visit the cemetery on his wife’s anniversary and Miss Pitt turns up:

[She] grabbed my arm wrenching it to the side expertly until I’d fallen to my knees – she probably had a lifetime of trying to break children’s wrists – then she shoved me and I fell on the grave of someone called Rose Wilson who’d fallen asleep in 1974.

She was now walking towards Mr Simmons. I crawled after her and grabbed the hem of her coat and with all my might pulled until she was on the ground, on her back. I sat on her and held my forearm against her throat. We looked at each other. It was the most extraordinary moment of my life so far…I still had a cigarette in my hand, and for some reason I took a puff. (217)

If you enjoyed Stibbe’s Man At The Helm, which also features Lizzie Vogel and her characterful family, you won’t be disappointed.  Actually, I thought it was even better. It’s an immensely good-hearted book with a captivating narrator. At the heart of it is the idea of home:

In my opinion, having a miserable home life is the worst thing to have – whoever you are – because it should be where you’re able to rush in and go to the toilet and flop on the sofa and cry at the horror of the world, or laugh at the silliness of it, and not dread being there, God. And thinking that made me realize how nice my own home was and, even more so, how nice Paradise Lodge was and how much we all, patients and nurses alike, loved to be there – crying or laughing or on the toilet. (202)