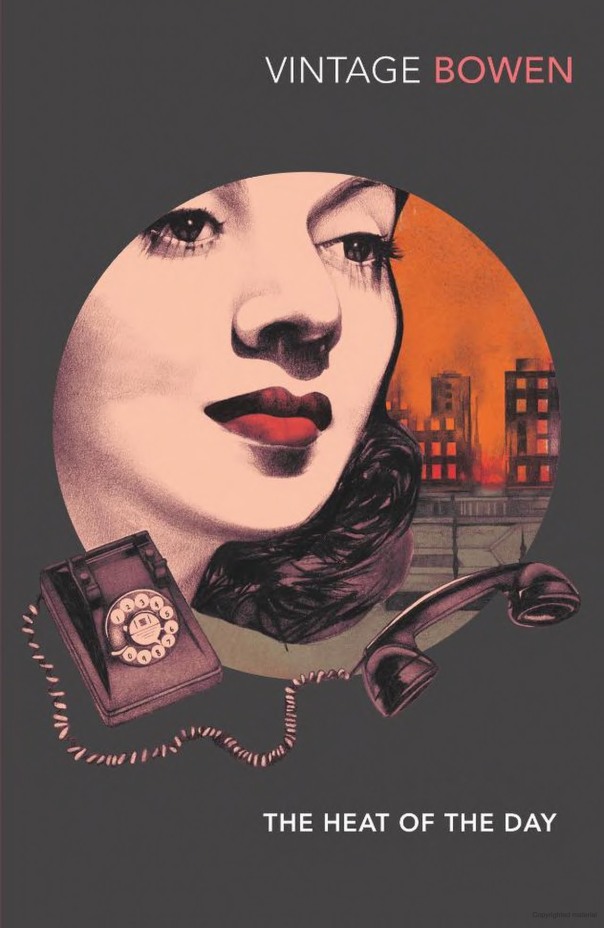 I never quite know what side to come down on with Elizabeth Bowen. How well she shows us ‘the death of the heart’, the terrible chill that falls on a failing relationship.  She knows all about communication beyond words, in posture, intonation, the movement of the eyes, the way the bones of the face sharpen and flatten with emotion.  But she can also overwrite, horribly:

…between mother and son the absence of every inanimate thing they had had in common set up an undue strain. Perhaps his fidgeting with the cushions was an attempt to acclimatize at least those. Stella and Roderick both, in their different ways, felt this evening to be beyond the powers of living they now had. They could have wished to live it as it could have been lived.

I think this is my problem with her. She builds wonderful scenes and interactions but she doesn’t let them do their work.  She must explain, fillet it, bury feeling in verbiage.

Someone described The Heat Of The Day as Graham Greene rewritten by Virginia Woolf. There’s something in that. Stella is stalked by the creepy secret service agent Harrison who claims her lover Robert is selling secrets, and whose price for staying silent is Stella herself. Is it true? Will she pay the price?

Whether or not Stella’s predicament gets you in, what you will remember is London in wartime – the icelike tinkle of broken glass being swept up among the crisping leaves and … the charred freshness of every morning,  the “sunny emptiness” where a building once stood, the tenseness of evening between sunset and the first siren, drifts of leaves in the empty deck chairs of closed parks, strangers saying “good night, good luck” as they go home each night, and the febrile intensity of relationships that last hours or days.  And you’ll remember Stella’s visit to the old family house in Ireland, an extended meditation on the transience of individual lives in the peculiar sadness of a house full of reminders of the things people once cared about.  It makes you see the feverish speed and intensity of life in London through the wrong end of a telescope, so that everything seems brighter, sharper, but smaller. None of these complicated individual lives, in the end, will be remembered.

And the seasons come and go with no regard to human history. At the end of the book the factory girl Louie takes her baby back to the site where her parents’ house stood before it was bombed and they were both killed:

The thin air which had taken the house’s place was, now that she stood and breathed in it, after all full of today and sunshine; the ridges left by the foundations feathered and starred with grass in light and in shadow. It was September, dahlias and asters blooming only a garden or two away. This was, as it had always been, a very quiet road, inland, with lime trees planted along the pavement. The baby slept in his pram… 329

7 thoughts on “Elizabeth Bowen: The Heat Of The Day”