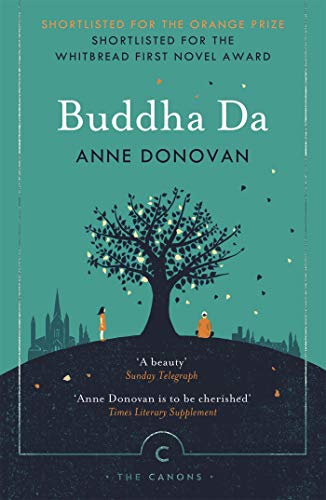 This is the story of Anne Marie’s Da, the painter Jimmy, and his involvement with Buddhism. The story is told in the voices of Anne Marie, almost twelve years old, Liz her mother and Jimmy’s wife, and Jimmy, the Glaswegian painter, ‘ma Da,’ who becomes more and more drawn to the practice of meditation. This obviously throws up conflicts within the family and among Jimmy’s friends and colleagues. A good idea to examine the practice of Buddhism through the eyes of a fairly uneducated working class man? Well, yes, but there is just one snag.

Ma Da’s a nutter. Radio rental. He’d dae anythin for a laugh so he wid; went doon the shops wi a perra knickers on his heid, tellt the wifie next door we’d won the lottery and were flittinn tae Barbados, but that wis daft stuff compared to whit he’s went and done noo. He’s turnt intae a Buddhist.

At first Ma thought it wis another wanny his jokes.

‘Ah’m just gaun doon the Buddhist Centre for a couple hours, Liz, ah’ll no be lang.’

‘Aw aye, is there free bevvy there?’

Jimmy’s search for enlightenment and his atypically serious behaviour causes a great deal of angst to his extended family, and especially to his wife when he announces he wants to live a celibate life. His daughter Anne Marie is more mature and understanding.

Jimmy’s struggles to find his way in meditation strike a chord for anyone who has tried it for themselves. There is a lovely description of a moment of peace he finds at a retreat.

Ah stopped and pit ma haunds on ma legs, just rested them and listened. The prayer room had a glass roof and you could hear every drap; some plip-ploppin, some squelchin and some thumpin doon as if they were gonna break it. And somehow ah fund masel followin the raindraps as they landed on the roof, no really listenin, no anythin, just sittin…And it wis like the rain wis alive, know, and everythin in the prayer room seemed tae disappear, couldnae hear anybuddy or see anythin; it wis just me and the rain.

I enjoyed this tale of Jimmy’s struggle with finding a whole new way of life and also of Liz’s difficulty in understanding it. But most of all I enjoyed Anne Mare and her finding herself in music. A nice little feel-good tale.

But why did it have to be in ‘Glasga’ dialect? I found it a struggle to read. I persevered because I was engaged by the idea, and the characters, but I couldn’t see what this added to the reading experience. In fact, I felt it would have probably put quite a few readers off!