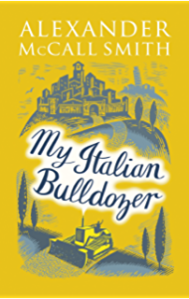 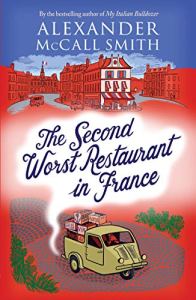 It is not often the Gerts write about books they haven’t read, but in this case, when we all seem in need of cheering up, I have put aside my review of Ali Smith’s Autumn and Winter and given space to two books which will give us a jolly good laugh.

Alexander McCall Smith is a reliably good writer, even if one does sometimes get a little tired of Bertie (13 books in the Scotland Street series) or Isabel Dalhousie (13 books also in the Sunday Philosophy Club series). I have seen that his latest books are about Detective Varg, but the title that caught my eye was The Second Worst Restaurant in France, the second book in a series about Paul Stewart, a restaurant reviewer. The first book in this series is called My Italian Bulldozer, and here is the blurb

Paul Stuart, a renowned food writer, finds himself at loose ends after his long-time girlfriend leaves him for her personal trainer. To cheer him up, Paul’s editor, Gloria, encourages him to finish his latest cookbook on-site in Tuscany, hoping that a change of scenery (plus the occasional truffled pasta and glass of red wine) will offer a cure for both heartache and writer’s block. But upon Paul’s arrival, things don’t quite go as planned. A mishap with his rental-car reservation leaves him stranded, until a newfound friend leads him to an intriguing alternative: a bulldozer.

The book set in France has a restaurant so bad it’s famous, run by twin sister landladies, a scene where the only waitress gives birth during the dinner service and another where the maitre d’ storms off after fighting with the head chef.

Restaurants, food, love affairs, travel; all the things we can’t do at the moment.

I’m willing to while away an hour or two.

Or you may prefer to read his very latest book about the Swedish Detective Varg and his work in the Department of Sensitive Crimes.