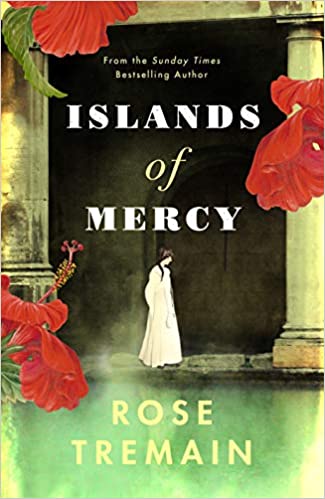 Rose Tremain’s new book is a dizzying ride.  Set in the middle of the nineteenth century, it covers a huge range of topics, among them British colonialism, life and environmental depredation in Sarawak, life in Bath, the inadequacies of the nineteenth century medicine as practised in Bath, morgues in Paris and London, poverty in Ireland, and the overarching theme of the pursuit for meaning in life, particularly as experienced by women. Oh, and did I say the effects of Married Women’s Property Act?

The central character is Jane Adeane, in her early twenties, six feet two inches tall, and an accomplished nurse known as the Angel of Bath to her doctor father Sir William Adeane’s patients. Here is his approach to treatment

Broussais had observed ‘ the destiny of the stomach is always to be irritated’ and it was true that very many of Sir William’s patients came to Bath primarily to be find relief from this discomfort by drinking he pure waters. He treated them also by raising blisters on the skin of the abdomen. When these were punctured, allowing the fluid to run out, it was thought that any infection within the stomach would also be drawn out, and although this treatment was so painful that some patients fainted when the blister was lanced, it was thought, on the whole, to be effective.

Seldom, however, had the doctor enquired about the quality of the food his clients habitually asked their bodies to ingest.

He may not be the greatest doctor but he is a loving and supportive father to Jane, and when she decides to go to London to stay with her artist Aunt Emmeline to escape the attentions of his colleague, Valentine Ross, he is understanding, although it is at great cost to his domestic arrangements.

In her aunt’s more Bohemian milieu, Jane meets a woman, the beautiful Juliette, who excites previously undreamt-of passions in her. Generally in this story we are whirled in and out of the minds of doctors, Rajahs and scheming servants. In the case of Juliette, however, we are mainly given descriptions of her beauty and of the passion she excites in Jane. For this reason, she is something of a cloudy figure, unlike the scheming Leon, Sir Ralph Savage the self styled Rajah of Sarawak’s  chief assistant and lover

And Leon didn’t want to die. He planned to make himself the manager of the cannery, overseeing all its construction work and then putting himself first in line to make money from it once it began exporting its tinned fish.  He had dreams of these tins being shipped, not just to China, but carried north-westwards into Russia.

The book begins with the story of Clorinda Morrissey, a resourceful Irish  woman who sets up a pleasant tea-room in Bath, and a character who has a benign effect on the lives of those she meets. Here is the response of her young niece experiencing freedom in nature for the first time

…held out her arms, in the manner of a flying bird, and began to run in wild circles, then she cast away her boots, held up her skirts and pelted to where the ocean came siding in over the sand. She let the water drench her feet, bringing her gifts of tiny stones and shells and drifts of bladderwrack.

A story of many lives and passions, fulfilled and unfulfilled love, and death. A good long story to read over the Christmas holidays. Some characters work better than others, and the writing is predictable at times, but the stand outs for me were the character of Jane and the descriptions of the jungle in Sarawak.

As suddenly as they arrived, the storms moved away.

The sun returned and the forest exhaled its lungfuls of water as hot vapour into the sky. The relentless cry of the gibbon was heard again. the island showed itself as a thousand shades of flickering and shining green.