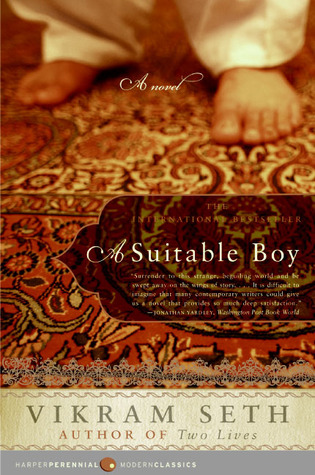 Why would anyone want to read a novel of 1349 pages set in 1950’s India? Well because it’s written by Vikram Seth, and he has the lightest possible hand in spinning deeply engaging stories of this world we live in.

But that’s not to say I didn’t have resistance to embarking on A Suitable Boy. Seven years earlier I had read his first book, a novel in rhyming sonnet form. An unlikely best seller, The Golden Gate was about the lives and loves of a group of friends living in San Francisco. After about ten minutes of reading, I became unaware of the form and raced through Seth’s light and humorous, yet heart breaking tale. I shall never forget Janet Hayakawa on her motor-bike. Then in 1993 I bought A Suitable Boy at a Writer’s festival , and Vikram Seth signed my copy. It has been languishing on my shelves ever since. It was so large. But now with my new project of reading one considerable 20th Century work each month its time has come, and I spent the last two weeks immersed in it.

And again the Seth magic works its charm. The story begins at a wedding and ends with another wedding just over one year later. Some characters are deeply involved in the tricky politics leading up to the first post- Independence National election and are fighting for their political lives. Some of the young are trying to work out their paths in life, others are wildly and irrationally in love, parents are intent on controlling the lives of their children. Chapters alternate between the political and personal lives of the characters and are divided into nineteen parts with appropriate rhyming couplets indicating the subject matter.

A couple glide down-river in a boat.

A mother hears that mischief is afloat.

And even bridge stokes tumult at the Club.

Someone is stabbed in Bhrampur, someone dies,

While private shame is viewed by public eyes.

The story is shared by four families, the Mehras, the Kapoors, the Khans and the Chatterjis who are joined by ties of marriage and friendship. The main protagonist, for whom the ‘suitable boy’ is being sought is Lata Mehra, who is nineteen and studying English at University. Her mother is the controlling Mrs Rupa Mehra, very much at odds with her daughter’s desires. She is a widow, constantly on trains visiting relatives, seeking connections, trying to prevent Lata from making a deeply undesirable (to her) alliance.

Then in the Kapoor family we have Maan; feckless, self-indulgent, spending his time partying with his friend Firoz Khan until he falls madly in love. The Chatterji family seem closest to Seth’s own, with their love of rhyming and the father who is a Judge (Although is Seth’s case his mother was the Judge) He has said in interviews that Amit Chatterji, the dreamy writer is somewhat modeled on himself.

Lata was speechless for a moment. Then in a tone of disbelief she said: ‘You treat me like a child.‘

Mrs Rupa Mehra wavered for a few seconds between suppression and placation, them murmured:’What is the harm, darling? I am not forcing anything on you…’

But the story moves outside the drawing rooms of the wealthy and explores all levels of Indian society. We learn about the shoe leather trade in India from high to low. The tiny boys who skin animals for the hides to be made into leather, the factory managers, and the power plays between workers and management in the big shoe factory. (Seth’s father worked at a managerial level for Bata shoes in India). His story is based on deep personal knowledge as well as research.

We take a trip to a far away village and experience life there when Maan has been sent away with his Urdu teacher by his lover.

Every fifteen minutes or so the train stopped at a small railway station, sometimes in the middle of nowhere, sometimes in a village. Very occasionally it would halt in a small town, the headquarters of a subdivision of the district they were traveling through. A mosque or a temple, a few neem or pipal or banyan trees, a boy driving goats along a dusty dirty track the sudden turqouise flash of a kingfisher…

We attend a religious festival that ends in tragedy, and all the while Seth draws us into the humour and tragedy of people’s lives. When his book first came out some critics in India felt it was too light weight, too politically uncommitted. I think his strength is that he doesn’t shy away from any dark or tragic events, but always writes with compassion for all. He is almost like a little god sitting above it all and saying with a rueful smile in Puck’s words

Lord, what fools these mortals be

I feel I have learned a great deal by reading this book. I would highly recommend it, especially if you are about to go on your summer holiday.

And did I say it was very funny?

The BBC showed a series based on this book last year to mixed reviews.