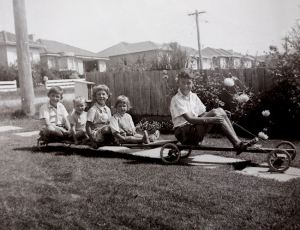 Now that Clive James, poet, critic, raconteur is coming to the end of his days, it’s worth celebrating his marvellous memoir with this favourite episode, in which young Clive in his billy-cart, a fruit box mounted on old pram wheels, wreaks havoc on the prized garden of Mrs Branthwaite, the terror of Irene St and famous for her poppies.

I organised the slower carts like my own into a train. Every cart except mine was deprived of its front axle and loosely bolted to the cart in front. The whole assembly was about a dozen carts long, with a big box cart at the back. This back cart I dubbed the chuck-wagon, using terminology I had picked up from the Hopalong Cassidy serial at the pictures. I was the only one alone on his cart. Behind me there were two or even three to every cart until you got to the chuck-wagon, which was crammed full of little kids, some of them so small that they were holding toy koalas and sucking dummies.

From its first run down the far side, my super-cart was a triumph. Even the adults who had been hosing us called their families out to marvel as we went steaming by. On the supercart’s next round there was still more to admire, since even the top-flight ball race riders had demanded to have their vehicles built into it, thereby heightening its tone, swelling its passenger list, and multiplying its already impressive output of decibels. Once again I should have left well enough alone. The thing was already famous. It had everything but a dining car. Why did I ever suggest that we should transfer it to the nearside and try the Irene Street turn?

With so much inertia the super-cart started slowly, but it accelerated like a piano falling out of a window. Long before we reached the turn I realised that there had been a serious miscalculation. The miscalculation was all mine, of course. Sir Isaac Newton would have got it right. It was too late to do anything except pray. Leaning into the turn, I skidded my own cart safely round in the usual way. The next few segments followed me, but with each segment describing an arc of slightly larger radius than the one in front. First gradually, then with stunning finality, the monster lashed its enormous tail.

The air was full of flying ball-bearings, big kids, little kids, koalas and dummies. Most disastrously of all, it was also full of poppy petals. Not a bloom escaped the scythe. Those of us who could still run scattered to the winds, dragging our wounded with us. The police spent hours visiting all the parents in the district, warning them that the billy cart era was definitely over. It was a police car that took Mrs Branthwaite away. There was no point waiting for the ambulance. She could walk all right. It was just that she couldn’t talk. She stared straight ahead, her mouth slightly open. 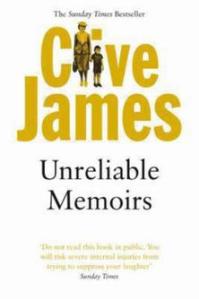