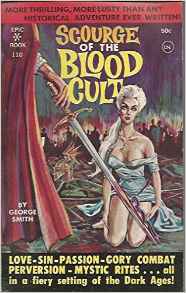 “Violence and sadism gripped the land! Baring their bodies to the lashes of cruel whips, the blood-cultists incited the terrified townspeople to join with them in spreading the mystic scourge over the whole nation. But the young and two-fisted soldier Malcolm MacAlpine wielded a slicing sword as he led his troops against the blood maniacs on the loose.”

Gert has been giving some attention to the cast for the film.  Russell Crowe for two-fisted Malcolm McAlpine? But who is the busty heroine?