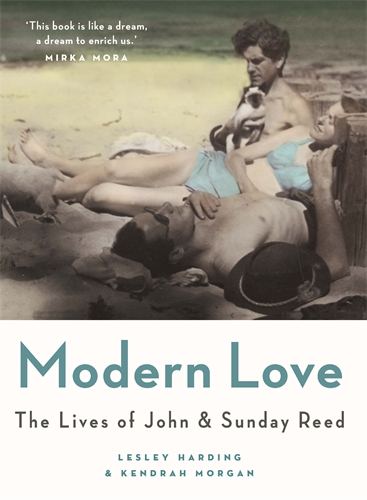 The lives of John and Sunday Reed and the artistic community they presided over at their house Heide provided the background for Emily Bitto’s Stella Prize winning novel The Strays, which we reviewed here https://gertloveday.wordpress.com/2015/07/08/emily-bittothe-strays/ Recently I’ve been absorbed in this biography  by Kendrah Morgan and Lesley Harding.

The Reeds lived unconventional lives, although both came from from well-heeled families, and their support of Left political ideas ensured their unpopularity in the conventional post World War 2 world of Australia. Above all, they were committed to the work of the arts as an essential source of meaning in life.

The Reeds had an open marriage, and Sunday had two very deep and passionate affairs with the approval of her husband. (There is a suggestion that he may have played the role of voyeur in the menages à trois they lived in with the artist Sam Atyeo and later Sydney Nolan). There is little doubt Nolan (seen in the cover picture) was the love of her life although she was deeply and indissolubly attached to her husband.

This book is a fascinating read, describing the struggles to create a Contemporary Art Society, a viable magazine of Art and Literature, and a Museum of Modern Art in Melbourne against considerable opposition. They poured money into all these endeavours, but ultimately met only with moderate success.

However, although the book uses letters and diaries, for me it has the flavour of an authorised biography. We are told Sunday has a ‘nervous breakdown’ after particularly distressing events like the acrimonious break with Nolan, but the true nature of her mental illness is never named. She has several episodes of this nature.

Similarly the disturbing behaviour of their adopted son Sweeney, who, it is suggested, suffered from sexual abuse at the hands of a trusted family friend, is named but not explored. Psychological depth is lacking.

Heide is now a beautiful modern art gallery and the Reeds’ names will always be linked to the belief and support they offered artists like Charles Blackman, Albert Tucker, Arthur Boyd and, of course, Sydney Nolan. They were generous and dedicated but did not encounter much gratitude. They were seen as too controlling, or living like vampires off the artistic drive of their protégés. And no-one gave them more venom than Nolan. In his book Paradise Garden, fifty poems overlaid with line drawings, Nolan spelt out a vicious repudiation of his love for Sunday in way that ensured that all who knew them would understand.

You had the line

and I at the bottom

you cast the fly

Their lives were an attempt to live with friendship, art and freedom, but they had much suffering to endure. Sweeney, John, and Sunday all took their own lives.