The woke socialist liberal elitist left-wing paedophile Silicon Valley-loving media has tried to cover it up – but the truth is out.  Major Biden (a WSLELWPSVL dog) has been savaging patriotic Americans and has been sent off to have the nips taken out of him.

Gert would like to defend Major by pointing out even worse behaviour from non-American dogs. Vladimir Putin’s Merkel-threatening dog Konni is a good example (is Joe Biden perhaps training Major for diplomatic duties?) 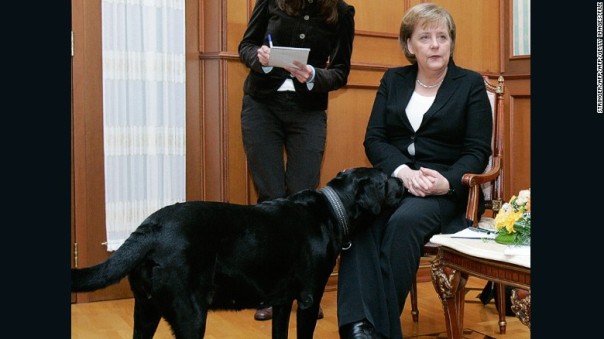 Nicolas Sarkosy’s chihuahua and two Labradors chewed up some of the most precious furniture in the Silver Salon of Napoleon, causing tens of thousands of euros worth of damage, and Macron’s dog weed in a gilded fireplace during a ministerial meeting. (“I wondered what that noise was,” said one of the ministers).  Former President Jaques Chirac’s poodle was so disturbed at being transplanted from the Elysée gardens to a palatial Parisian flat that he started viciously attacking his owner and had to be sent away to a farmhouse.

Let’s hope Major doesn’t suffer the fate of the bad-tempered camel the government of Mali gave Francois Hollande. He left it in the care of a family who made it into a stew.  The Mali government then gave him a “better-looking camel”.  Its fate is not recorded.